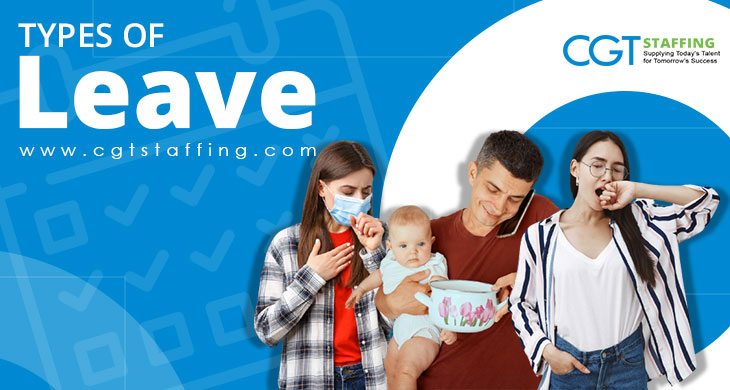 Companies and firms all over the world allow various workers to take time off under certain conditions. Some of these are paid, others unpaid, or even partially paid. Certain types of leaves are mandated by the law prevailing in the country in which the business operates. Others are available to workers based on the employer’s discretion.

Having a deeper understanding of various leave categories and their validity is very important for HR managers and reporting managers alike. It can help an organization remain compliant with the relevant laws while offering a better experience to all employees.

Read on to discover more about the primary leave types that organizations need to remain aware of at all times.

Different Types of Leave in the United States

The United States has a complex structure centered on guidelines provided by the federal government. However, states have a large degree of independence as defined by their own constitutions. This means the types of leaves discussed below may vary from state to state; in particular, how they are treated (unpaid vs paid). The most recognizable types of leave include:

Vacation leave or annual leave is a fairly common type of paid time off. In the United States, the federal government does not make this type of leave mandatory, but most organizations can and do offer paid vacation time to their workers during the course of a year. The conditions and stipulations attached to paid vacation time or annual leaves also vary from state to state. Typically, employers follow one of these three approaches:

Parental leave is a term that is quickly redefining the gender-based maternity/paternity leave types. It is typically up to an employer to classify paternity or maternity leave as paid leave. However, the FMLA guarantees every woman up to 12 weeks of time off upon the birth or adoption of a child. Moreover, some states currently offer partially paid parental leave for both mothers and fathers.

The Family and Medical Leave Act offers protection to employees who need time off for medical concerns or to care for a sick family member/dependent. The FMLA currently offers employees of a public agency or a company with over 50 employees up to 12 weeks of unpaid FMLA time off. However, such leave can only be claimed by individuals credited with 12 months or 1,250 hours of employment with the company or public agency. Employers have the discretion to treat sick days as paid sick leave, even though the FMLA does not require it.

FMLA leaves are valid for reasons that include:

There can be certain circumstances where workers may need to take time off even after their PTO limit has been exhausted. This is usually necessitated by unexpected events that disrupt the worker’s personal life. There is, however, very little federal regulation in the United States outside of the FMLA regulating unpaid time off. Handling leave without pay is usually at the employer’s discretion. Most employers have a basic policy that either includes leaves without pay or excludes it. Determining whether to grant this type of leave to an employee varies from case to case.

Public holidays typically are included as a set number of paid time off in most organizations. However, this may not be the case for workers who work part-time or on an hourly basis. In the United States, the major public holidays include Thanksgiving, Christmas, Independence Day, and New Year’s Day, though there can be variations in how companies treat these holidays. For example, businesses often treat Thanksgiving Day as a paid day off, even though no federal guidelines require them to do so.

Other employers tend to use a floating system, providing for a set number of PTO days corresponding to the number of public holidays. In the event of an employee working on a public holiday, they can still take leave later to substitute for the holiday.

Leaves for observing religious duties are often granted to workers from diverse backgrounds. However, in most cases, this counts as unpaid leave. In addition, employers may require workers to submit some type of evidence that they ascribe to a particular faith in order to get approval for leave relating to religious observances.

Some other leaves are unique exceptions, like certain types of leave for federal employees. However, employers still have to accommodate them when conditions arise. For example:

These are fully paid leaves granted to individuals that are on active or inactive duty as part of the National Guard or Reserves.

Over 1.5 million individuals are summoned each year by state courts to be part of a jury overseeing legal proceedings. Federal laws don’t require employers to treat this as paid time off, but some states mandate businesses to do so.

Time off on voting day helps ensure everybody has a fair chance to participate in an election. Federal laws do not clarify whether this qualifies as paid or unpaid time off. However, some states do require at least an hour’s pay to be awarded on an election day. That said, polling is typically active from 7 AM to 8 PM which allows most workers to cast their vote outside of their normal working hours.

Adverse or dangerous weather conditions such as snow, heavy rain, flooding, or hurricanes can be a danger to employees trying to make their way to work. As a result, most will have to take time off, even if they want to report to work. If employees have paid time off remaining, this leave will usually be decremented from their PTO allotment.

Certain organizations may require a formal Adverse Weather Leave Letter to support their time off necessitated by weather. However, they may have to make up for the time lost at a later date.