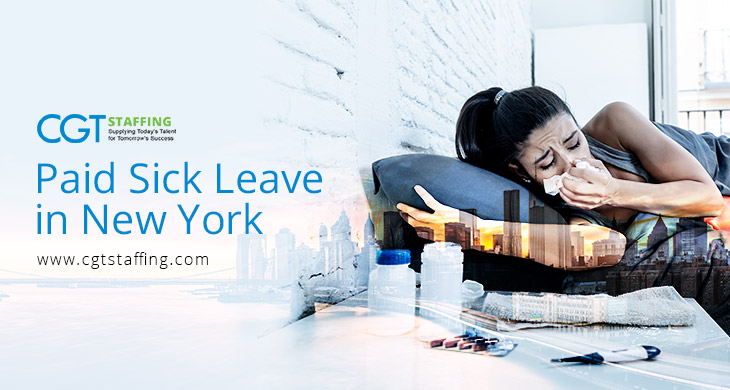 Paid sick leaves aren’t a new concept in the United States. Many workers living in the state already have access to paid sick time. However, the time off was not guaranteed to many other workers. That is until the State of New York passed specific laws under the new legislation called New York Paid Sick Leave. Under the law, which came into effect on January 1st, 2021, workers can use paid sick time collected since September 2020.

Over 1 million residents in New York did not have the benefit of paid sick time until the New York State Paid Sick Leave Law. Even before the pandemic hit, this was very problematic. Many of these people would be at the risk of losing their jobs if they fell sick or had to care for a sick loved one. You can clearly see the issue. Many vulnerable workers had to make a harsh choice between recovering and holding down their employment.

Naturally, with COVID-19, this problem became much more visible. As part of its efforts to stop the spread of the coronavirus and ensure safe and healthy workplaces, the State has expanded the rights under New York paid sick leave to all residents.

The Number of Sick Leaves Allowed

The exact number of an employee’s paid sick leave in NYC and other areas of the state depends directly on the size of the employer. According to the new law, New York paid sick leave requires:

When Do Paid Sick Leaves Start to Accrue?

Workers in the state are eligible to accrue paid time off in case of illness under the NYC Paid Sick Leave Law. The law states that workers in the state begin to accrue this leave time from September 30, 2020. The law also sets the threshold for leave to accrue. For every thirty hours worked, a worker should acquire at least one hour of paid sick leave. Employers can also choose to offer the full amount immediately upon the start of the year. However, this leave cannot be reduced or revoked in case the employee works fewer hours than expected. Employers can still address the productivity problem in other ways, such as an employee’s performance appraisal, but they can’t retaliate against lawful sick leaves.

Employers need to make efforts to clarify and reinforce this and adjust their talent acquisition strategies accordingly. Leave policies also need to be revised and communicated to all stakeholders. This includes workers, managers, recruiters, and third-party employment services such as a staffing agency. Failing to do so can place you in violation of the new law.

What Workers Are Eligible For Paid Sick Leaves?

Under the new rules concerning New York State paid sick leaves, all workers in private-sector firms are entitled to these hours. This right is not affected by the industry, the nature of the role (permanent, contract-to-hire, temp), or the status of employment. It also includes people employed by charter schools, not-for-profit bodies, and private schools. However, the law excludes certain classes of workers in the state, which include:

When Can Employees Use Sick Leaves?

Employees are entitled to use the sick leave accrued after January 1, 2021. To use the accrued sick days, workers need to submit a written or verbal request for leave. However, this is only permitted if there are specific reasons relating to health or safety. NYC paid safe and sick leave is permitted if:

Using accrued leave for sickness (employee as well as a family member) is permitted under two broad categories:

Accrued leave can also be used for safety reasons relating to the employee or a family member, particularly in cases of:

Yes, the state guarantees paid sick leave depending on the size of your employer.

Does sick leave get paid out in NYC?

It depends on the terms of your employment, but a payout is not required by law.

How do I get paid sick leave in NY?

A verbal or written request should enable you to take advantage of leave under permitted circumstances.

Can you get fired for calling in sick in New York?

No, employers are prohibited from retaliation against workers exercising their right to sick leave.