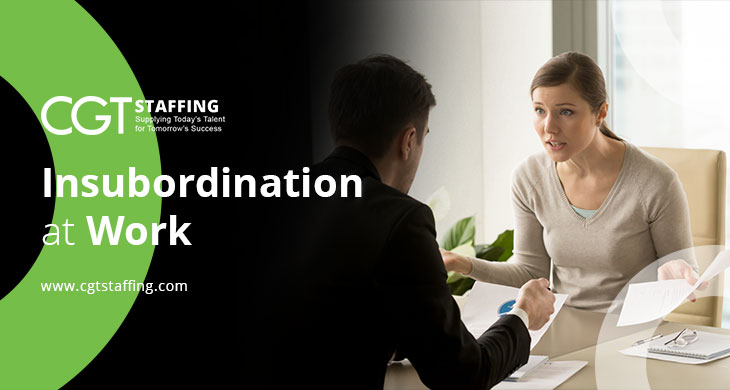 Organizations are based on hierarchical structures. In order for an organization to function smoothly, it relies on each member of the hierarchy to work together within that structure. Disruptions within the structure, like sudden employee departures or terminations, can disrupt the overall workflow of the organization.

This is why instances of insubordination are equally unwelcome in a business organization as they are in the military. The military, of course, usually has very strict methods to deal with some instances, including a court-martial in extreme cases. For businesses, dealing with these events can be more complex.

Read on to learn more about identifying and managing insubordinate workers in a workplace setting.

At its most basic, the term “insubordination” refers to a worker refusing to follow instructions. This typically entails an element of defiance. In a rigid hierarchy like the military, this is an extremely serious infraction. However, workplaces aren’t designed that way. Managers don’t (and can’t) expect workers to adhere to every management instruction to the letter.

In fact, healthy workplaces often allow room for flexibility in which employees directly working on a task are empowered to execute their work at their discretion. In such cases, refusing or countering instructions can actually be to the benefit of a business. 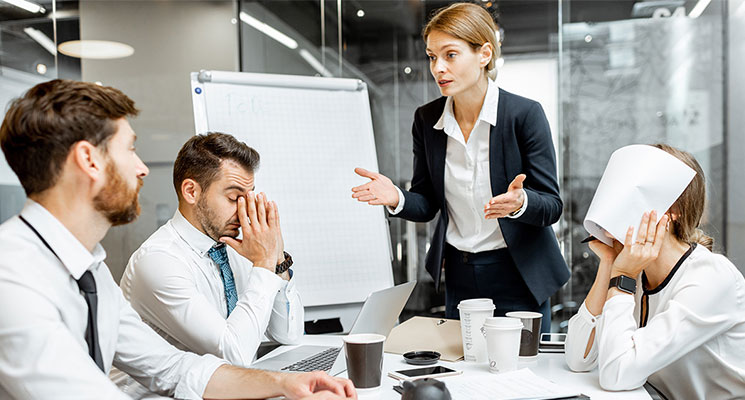 However, workers actively or aggressively defying instructions does not qualify as pushback. In this case, the refusal generally has nothing to do with the worker’s expertise in offering alternatives to a manager’s instructions. Unless the manager has asked a worker to do something illegal or way outside of their scope of work, deliberate refusal or defiance can become a serious workplace problem.

What Qualifies as Insubordinate Behavior?

Many managers and professionals often confuse any type of refusal in a workplace context with insubordinate behavior. However, in most cases, it is a more nuanced event. For example, a manager could have unrealistic expectations from a worker concerning certain tasks. Even if workers do their best to meet these expectations, they will still fall short.

This cannot be considered insubordination, even if the worker failed to carry out instructions to the letter. Recruiters may want to readjust their talent acquisition strategies to avoid onboarding such managers.

For a negative interaction to truly be considered the same, these three conditions are necessary:

There are still complexities to this scenario. An aggressive refusal, especially in the presence of other parties, will typically be a clear-cut case for disciplinary action. On the other hand, a quieter or politer form of insubordination may not incur the same consequences. The specifics of the situation, including the relationship between the manager and their subordinates, will also play a key role in this.

Most workplaces tend to handle conflicts and negative interactions with a certain degree of confidentiality and respect. However, gross insubordination can quickly turn into a heated situation that may make a working relationship between the parties involved almost impossible. Again, the specifics of a situation will always factor in when identifying and managing a subordinate that’s crossing the line. But these examples can help managers and professionals gain more perspective:

Failing to follow instructions or only following them partially is usually frowned upon in workplaces. It may not always be grounds for immediate corrective action or a disciplinary meeting, however. The most blatant kinds of insubordination, on the other hand, can result in termination. In most cases, this behavior is identifiable if these three conditions exist:

The Best Way to Handle an Insubordinate Employee at Work

Insubordination in a business setting is always undesirable, but it may not be unusual. Even the most empathic of managers will sometimes come across open (or quiet) defiance. More problematic workers could even resort to workplace bullying if they feel they can get away with it. To prevent the situation from escalating and raising questions in a subsequent workplace investigation, dealing with such employees needs to be handled carefully. This might involve:

What is insubordination in the workplace?

What is insubordination at work?

Refusing to follow a manager’s instructions, or adopting an unreasonably belligerent attitude.

What does insubordinate mean?

Insubordinate means refusing to obey orders from someone in authority, and not showing respect, particularly in front of other parties.

The variables can include an employee’s attitude, the manager’s response, and a gap in expectations.

How to address insubordination?

Do try and discover the root of the problem. Don’t lose your temper. Taking it personally will just make you angry and more frustrated.

How to deal with insubordination in the workplace?

Don’t ignore insubordination, document it, issue the necessary warning, and forward the case to HR for remedial action or termination.

How to write up an employee for insubordination?

Insubordination write up include all documented evidence of single or multiple occurrences and follow the relevant workforce policies to address it.

When is it not insubordination?

Whistleblowing or refusing to carry out illegal orders doesn’t qualify as such.

Can I fire someone for insubordination?

Yes, depending on the severity and terms of the event.

How to prove insubordination?

Identify and document the worker’s behavior including communicating warnings within company policies.

Is insubordination just cause for termination?

Yes. Especially in cases that threaten workplace cohesion, morale, and authority, along with safety.

Can an employee be fired for insubordination?

In very severe cases with no indication of improvement, employees do get fired.

How to handle insubordinate employees argumentative?

Handle all interactions with a certain degree of confidentiality and privacy. Prevent the worker from creating public scenes and awkwardness in the workplace.

Is walking out of a meeting insubordination?

Depending on the circumstances, it can be.

Why is insubordination bad?

It can impair the functioning of a workplace, and even set a bad precedent if severe cases go unpunished.

Only where it can be proved that the employee refused to comply with illegal activities, called out authority figures for malpractice or harassment, or was targeted unfairly.

How do document insubordination?