How to Make Pay Transparency Part of HR Strategy 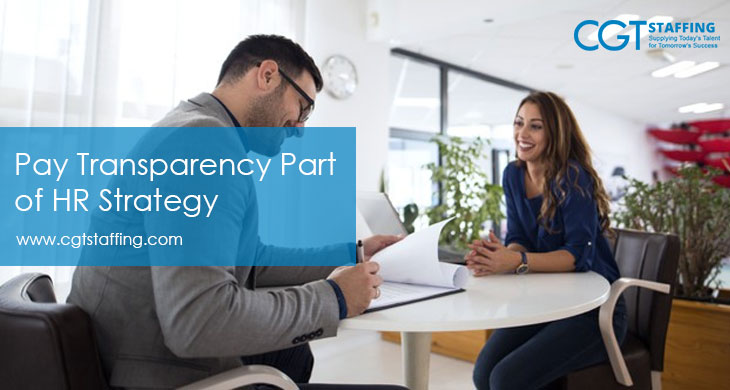 The argument in favor of transparency has gained a lot of traction in business circles over the past few years. Part of this is due to more structured regulations and company policies, as well as a better understanding of how to manage modern workplaces and workforces. Pay transparency, however, remains the subject of a lot of debate.

Conventionally, compensation and benefits packages have been a sensitive, private, and confidential matter among workforces. However, with workplace investigation processes revealing more than a few ugly instances of pay discrimination based on gender, ethnicity, religion, or even race, transparency seems like the only reasonable option. Regardless of personal inclinations and in keeping with changing public sentiment, many employers seem to be growing more open to transparency concerning the compensation they offer.

If you feel it’s time you started prioritizing compensation and benefits transparency, this blog discusses some of the concerns you may have, and ways you can leverage it for your overall talent acquisition strategies and employer branding:

Ways to Integrate Salary Transparency into Your Business

Salary transparency does not necessarily involve posting your payroll details for all and sundry. There are several approaches to try, many of which are in use in very diverse business models all over the world. Of course, labor laws and regulations also play a part in determining the extent of the transparency, such as specific transparent California salaries laws that require employee salary records to be public. Even if there are no such regulations or guidelines in your business area: here are a few good ways to start integrating pay transparency in your business:

Companies like Buffer have been campaigning for compensation transparency for several years now. And it has also set a great example of how to do it. The company publishes a full list of its payroll expenses, including wages and bonuses. This innovative “open salaries” concept has gone much further, with the company also including a calculation formula for candidates to understand the compensation structure, not just internal employees. Of course, the formula and structure need periodic updates to remain fair and sustainable.

In media and advertising firms, especially, a single employee or team of employees can often become valuable enough to become the unofficial face of the business. Powerhouses like the British Broadcasting Corporation have followed this model as part of their annual reports. In keeping with transparency as well as financial disclosure, the company discloses a list of its top-paid employees, like hosts, anchors, or news presenters.

Unless required by law, you don’t have to make your payroll information publicly available. However, transparency should still exist for your employees. Whole Foods was one of the earliest to hop aboard this particular approach. The company has been a proponent of wage transparency for many years and allows its workers to look up compensation and bonus details of their 90,000 colleagues, right up to the Chief Executive Officer. To make matters a step further, the company allows employees insider access” to this information before the records are publicly disclosed in its financial statements.

Encourage Workers to Have Open Discussions on Wages

Conventionally, employees tend to keep their salaries and employee benefits private and confidential. Employers have also usually encouraged this practice in most workplaces. However, modern success stories like Starbucks have a drastically opposing approach. Far from keeping things hush-hush, the company encourages frank and open discussions between workers concerning wages and benefits. This encourages transparency and acts as a deterrent against wage discrimination.

One of the best salary negotiation tips for recruiters is to be efficient and precise. Haggling can often turn into an expensive waste of time, especially with high-volume recruitment or with specialized recruiting services like those offering medical staffing solutions.

Recruiters, whether in-house or third-party, have limited working hours, just like the rest of us. That is why the recruitment process should consider limiting the risks of protracted negotiations. Companies like Stability Healthcare, for example, always mention the full salary range in the job advertisement (the very first step of the recruiting process). That way, candidates have a clear idea of the upper and lower compensation limits, limiting their space of argument as well as screening out uninterested candidates from the start.

The Advantages of Pay Transparency to Your Organization

There can be many distinct advantages to prioritizing wage and benefit transparency to any organization. The impact and outcome can be hard to quantify in certain cases, but wage transparency typically improves your:

Should Performance Reviews and Salary Be Transparent?

Pay transparency is generally a move in the right direction, considering modern society. It serves as a deterrent to wage discrimination on any unfair grounds and empowers workers into understanding how their compensation and benefits compare to their peers. However, the positive outcomes do not come without some tradeoffs.

For many employers, certain concerns play a huge part in their hesitance to make wage and benefits transparency a greater priority. The biggest ones by far are:

Sometimes two workers in the same or comparable role may have vastly different employment packages. For example, a worker could have more experience than his or her peers or may have demonstrated valuable innovative and problem-solving skills. He or she could have successfully worked on a valuable project and helped your firm make a big win. Most businesses will reward this with bonuses, pay bumps, or even in-kind rewards like a paid vacation.

On the other hand, you could have workers in the same role who dropped out of college or started their professional careers late, or are even switching careers late in life. These will obviously have a lower pay scale. If confidential, the difference in pay should not present a problem. But transparency can often cause conflicts where workers may perceive themselves as underpaid. And, as every manager knows, conflicts like these are never good for business.

It’s not always employers who want to keep wages and benefits confidential. Most employees still value privacy, and how much a person makes is often a sensitive topic at the best of times. Employees may resent their pay packages being made public for any number of reasons. They may be paid fairly but still feel embarrassed about what they make. Or they may earn more than they want people around them to know, and wouldn’t want to share that information with all and sundry.

Competitors Could Use This Info to Headhunt High-Performers

Certainly, the biggest danger to transparency is external, namely your competition. Businesses frequently use any legal (or sometimes gray area) edge they can over others in their niche. And nobody’s above making an offer to a competitor’s best performer.

Transparent and publically accessible payroll information can potentially work against you in such settings. A competitor may be able to identify your highest performing workers based on their pay packages and bonus information. Knowing who to target (and what they’re currently making) is not the information you want to offer to headhunters and competing recruiters.

Should performance reviews and salary be transparent?

Although transparency in compensation and benefits details is generally good for a business (see here), in certain cases, transparency may prove to be a legitimate concern. The degree of transparency will ultimately depend on several factors including the size and nature of your business, the demand for specific types of workers, and how saturated your niche is with competing businesses. For more information, scroll here.

Are employee salaries transparent for nonprofits?

Many governments do not require statutory disclosure from non-profit organizations, such as the SEC requires from all publically registered corporations. However, the lack of a profit motive does not exclude the fact that non-profit organizations still employ a significant part of any workforce, and will almost certainly have some payroll expenses.

At the same time, it can be argued that non-profit firms, especially those engaged in relief or uplift work, have a moral obligation to be more transparent than a corporation, legal requirements notwithstanding. Some degree of transparency may still be uniform, especially concerning formal presentations that explain how donations are used.