The Impact of Immigration Reform on IT Staffing 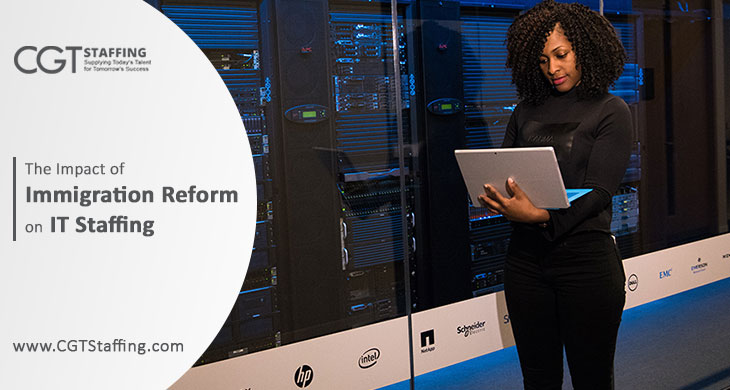 Immigration laws and immigration reform have been a topic of much-heated debate for decades. The current administration, under President Donald Trump, has always been vocal about rework immigration laws in the country while putting stricter scrutiny on illegal immigration.

One of the areas the Trump administration has expressed interest in reforming is the popular H-1B visa program. This blog explores how immigration laws and reform impact talent gaps, especially in IT staffing.

What Is The H-1B Visa Program?

The H-1B temporary visa program is the most common route for thousands of highly skilled foreign workers to meet specialized talent gaps in the United States. One of the reasons the United States is a world leader in many industries, including tech, green energy, and manufacturing, is because H-1B visa programs allow employers to source the best candidates from a global talent pool.

The current program was designed in the early 90s as a lottery system. The simple system was designed to bring in around 85,000 highly skilled foreign workers with at least a bachelor’s degree in the country to fill specialized roles in various organizations.

There is no doubt that many H-1B visa holders have brought skills and value to their employers,  strengthening U.S. economic, industrial, and technical superiority. However, over the years, numerous changes, court decisions, and public opinions have made the H-1B visa program much murkier.

There are a number of problems with offshore companies abusing the program whereas U.S.-based firms tend to play by the rules and only source the candidates they need. Here are a few ways employers have been known to abuse the current program:

Flooding the Program With Applications

Many people argue that the H-1B program has historically had an inconsistent monitoring and enforcement system. As a result, many offshore firms have been abusing the system by filing tens of thousands of applications. This increases their chances of acquiring an H-1B visa for workers.

One direct consequence of this is that genuinely deserving foreign workers find themselves lost in the clutter.

The abuse doesn’t stop with flooding the program with applications. Many firms have been found to be in violation of U.S. laws and regulations, especially in the fair treatment of workers. Many offshore firms report a much larger salary to the IRS while paying the worker only a fraction of it.

In other cases, firms often hold paychecks for foreign workers until there is an inflow of cash, such as client payments. U.S. labor laws specifically prohibit this practice. Unfortunately, most foreign workers, especially from Asian countries, accept this as a  common practice, much to their detriment

Another result of inconsistent regulatory oversight is turn-and-burn abuse. Firm deliberately hire workers that lack the necessary qualifications and skills. They do so with fake resumes, references, and employment history. Once these workers are in the country, firms begin to take advantage of them brutally.

Often, they are forced into housing complexes owned by the firm. Not only do the workers have to deal with poor living conditions, they often have to pay more than half of their salary as rent back to the firm. Again, many workers from less-regulated environments remain unaware that their employers are cheating them out of their hard-earned money.

Many times, these firms will abandon a worker altogether, with no hope for a sponsorship extension or a green card. That way, the firm keeps profiting from employee turnover.

While there are significant arguments against tighter immigration laws, the current administration aims to address regulatory oversight failing to curb H-1B visa abuses. Of course, it is important to note that an executive order does not hold the legal weight to change existing laws.

However, it does call for Congress to examine immigration legislation and its enforcement. In particular, the lottery system is thought to be outdated and lacking oversight.

One area of contention is the renewal and extension options that come with it. The H-1B visa is valid for three years, but it can also be renewed for another three years. Special extensions for 1 year are granted liberally. Effectively, this turns a 3-year visa program into a 7-year program.

The government estimated there were around 900,000 foreign workers in the U.S with H-1B visas in 2018. An additional 250,000 spouses also work in the country under an H-4 visa. The current administration aims to reverse legislation from 2015 that made this possible.

Additionally, as of the time of this writing, the USCIS has suspended the premium H-1B visa processing. This option allowed for expedited processing of a visa based on an additional fee. It is important to note that Congress will take some time to pass definitive legislation, and even that can be reversed by federal courts.

Increasingly heated debates between Republican and Democratic representatives will also add to the process.

The IT sector primarily consists of highly skilled and highly paid individuals that are not readily available in the United States. Many of these workers come from foreign tech hubs, including India and China. They are also catalysts for innovation and thought leadership within industries. Skilled immigrant workers have had a huge impact on the U.S. current position as a tech leader.

Current immigration reforms threaten to shrink an already small talent pool. IT and engineering sectors have always reported high demand for these skills in the U.S. but not enough candidates to go around. The proposed reforms may discourage some of the brightest IT minds in the world to come to America.

Instead, they may choose to take their skills to other places like Europe or the U.K. Potentially, this could lead to America losing its competitive edge in tech as talent starts migrating to competing economies.

Losing talent isn’t the only problem the IT industry will have to face. One of the reasons companies are open to hiring workers is that they cost less than their American counterparts. With a skill gap in the market, there are already not enough candidates to go around. But with tighter immigration laws, it may become even more difficult for IT firms to source the candidates they need.

This will accentuate the supply gap, even more, making it prohibitively expensive for IT firms to do business in the U.S. Many of these will take the logical route and resort to offshoring in other countries, ultimately causing a drop in employment in the U.S. However, a good option would be to partner with IT and engineering staffing agencies that can help you, source candidates, quickly and efficiently.