A Look at Compensation Confidentiality 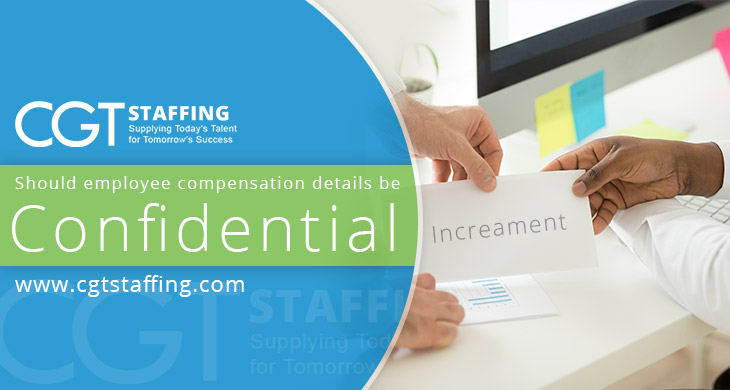 There has been a progressive shift towards more diverse workforces all over the country over recent years. Businesses frequently add diversity as a key performance factor in their recruiting efforts, whether for permanent, contract-to-hire, or temporary workers. However, the demand for equitable hiring is often expressed in conjunction with the demand for equitable compensation.

This can often prove to be trickier than hiring a diverse workforce. It’s not that businesses are actively paying workers differently on the basis of their backgrounds, religions, or ethnicities; rather, it’s that most businesses require workers to keep their compensation and benefits confidential. With popular opinion increasingly in favor of transparency in compensations, this blog explores whether this is a good idea.

How is Compensation Decided?

An existing worker’s compensation is usually subject to constant revision, based significantly on their performance appraisal. Most businesses design their appraisal processes to reward their highest-performing workers. Therefore, the better an employee’s work performance, the better the impact on their compensation evaluation. Of course, there are several other factors that play an important part, including the compensation package they were offered when first hired. This can depend on differentiators like:

As long as worker compensation is based on these factors or other reasonable ones, there really isn’t much cause for alarm. The problem arises with the perception that a business pays certain kinds of workers differently based on factors that play no part in their work or work performance, including:

These factors (and they have been known to occur, even if rarely) are what propagate the arguments in favor of transparency in compensation. However, what if a worker’s specific compensation does not remain confidential? The three following seem the most obvious:

Discussing one’s money situation can often seem crass, especially when modern perception ties in success with one’s earnings. In many cases, however, the mystery surrounding a business’s compensation policies can do more harm than good. Employees that are aware of how their compensation is determined are often more motivated to better it than employees who remain oblivious to it. While employers believe it can demotivate workforces to learn how much top performers make, it has been known to have the opposite impact. In sales or business development roles in particular, the rest of the team is encouraged by the success they perceive in a top-performers sizeable paycheck.

Of course, there may be certain cases where compensation transparency can prove to be more of a problem than a solution. In light of an unclear or complicated compensation policy, workers can often feel disenfranchised or sidelined regardless of their actual performance. But at the same time, with no restrictions on discussing compensations or recent pay bumps, a business could soon have a revolt on its hands.

Workers may feel disgruntled at a junior worker making more than them, even if the junior worker was a far better candidate based on your talent acquisition strategies and out-performed other workers by a large margin. In many cases, you may end up losing seasoned workers simply because they perceive you’re unfairly paying other workers more.

Every employee is unique in some way, of course. However, certain workers may have different compensations than other workers for several valid reasons. They could be better workers, could have achieved more, may have displayed innovative ability, or simply solved a key business or project problem. Many businesses will recognize and reward such employees with sizeable bonuses or increments. But many such employees, whether out of modesty or general secrecy, would want to keep this information private.

On the other end of the spectrum, you may have workers you pay fairly and they enjoy working for you. In private, however, they may be embarrassed about what they make. They could have rich friends or families. Or they could be older workers who dropped out of college years ago before returning to finish and start out at an entry-level position. Whatever the reasons, some workers may want to keep their compensation details private, which may not be possible with a transparent policy.

This is a very real possibility that transparency can motivate workforces to perform better and achieve more. Money is a powerful motivator, if not the most powerful. People will often take up challenges simply if they perceive it offers a better return for their efforts. In a business setting, a high-performing employee can often bring out the best in the rest of your workforce. Seeing the monetary reward for a worker’s good performance can often stimulate other workers to kick their own performance into high gear. Ultimately, this confidentiality can drive your overall output and profitability to higher levels.