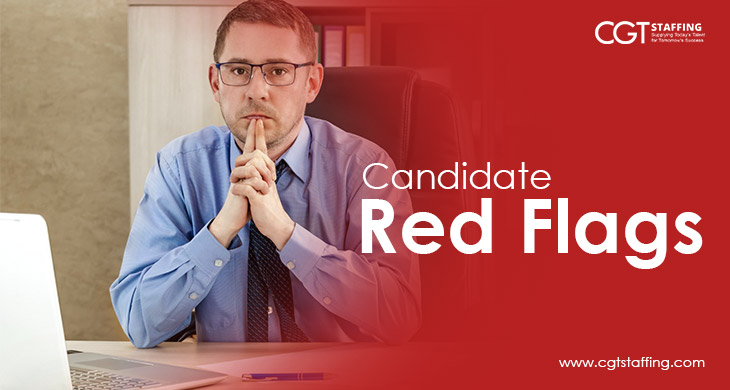 It is human nature to want to make a solid first impression. Candidates are no different. Most candidates will strive to make a better first impression than their competition. For some, this makes bending truths or failing to disclose information a matter of course. For an experienced staffing agency, weeding out questionable candidates is part of the process. But constraints on the workforce, budgets, and hiring timelines can make it harder for internal recruiters to spot inaccurate resumes.

The solution? Keep an eye out for certain telltale signs or “red flags,” especially when interacting with candidates in person or over a video call. Here are the most obvious ones that could signal a potentially disastrous hire:

The biggest red flag is often an attitude that is too laid back or casual. Being relaxed and confident is one thing, but being nonchalant about the role, corresponding motivations, and goals can often signal deeper underlying issues. Nearly every long-term talent acquisition strategy focuses on onboarding driven and motivated employees. These may not be core requirements for a role, but they are expected of a professional. A candidate that is passive or indifferent during an interview may not have much interest in the role. If nothing else, recruiters can count on the candidate exhibiting similar behavior upon their hire.

When asked about professional weaknesses, “I have none” is quite a popular answer among many candidates. Confidence is an important thing to have. That said, recognition is imperfections is critical, and central to a candidate presenting their best self in an interview. In fact, if a candidate is serious about “having no weaknesses,” there may be a lack of self-awareness that could lead to conflicts in the workforce. Genuine professionals always see room for improvement and growth at any stage of their careers. Somebody failing to acknowledge flaws might also exhibit a reluctance to improve and add more value to a role.

An Obvious Problem with Punctuality

Punctuality often does not receive the praise it deserves – the lack of it is almost always noticeable. Watch out for candidates showing up late to an interview. Of course, some candidates may encounter unforeseen issues, but those that exhibit a habitual problem with hiring deadlines and interview times may not merit serious consideration.

A lack of punctuality can indicate a lack of reliability. An unreliable member of the workforce could, by extension, cause unnecessary roadblocks and disruption in workflows. This is something all businesses can do without. In that context, businesses should enforce punctuality in both centralized and decentralized recruitment.

Talking Too Much or Too Little About Themselves

This may seem contradictory, but candidates who talk too much or too little about themselves are potential red flags. Talking too much, especially when it comes to long-winded explanations and anecdotes, could just be a smokescreen. A lot of it may be rehearsed to cast the candidate in the best light.

On the other hand, talking too little may indicate an unwillingness to disclose important information. Where candidates are reluctant or vague when discussing questions like the reason for leaving previous employers, they may be hiding something more serious. In such cases, a workplace investigation process that conducts robust background checks on candidates may prove very useful.

Difficulty with Managing Phone Use During Interviews

Why Do These Signals Matter?

It makes sense to be on the lookout for these red flags among candidate pools, but what is the overall goal of being wary of them? The short answer: to minimize the chances of making a bad hire. For recruiters and managers alike, onboarding a bad hire is a nightmare. A bad hire can result in many undesirable situations, some of which can begin impacting the larger workforce. Such a candidate/worker will not become a sustainable part of the workforce, and that will inevitably increase employee turnover and the associated cost of replacing a hire.