Employers Should Be Concerned About These 3 US Supreme Court Cases 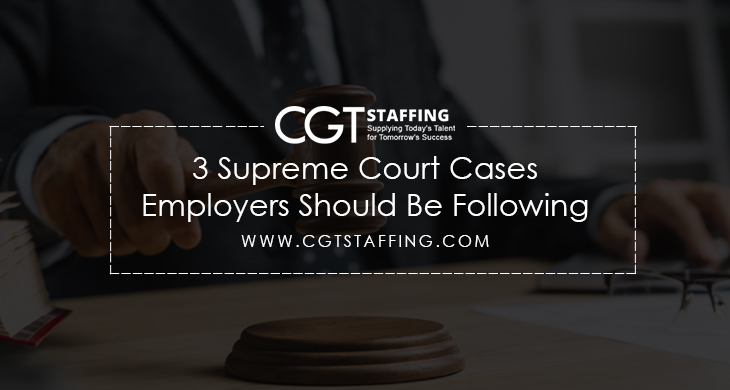 As a result of the COVID-19 pandemic, the United States Supreme Court extended its last term well into the summer months. This was primarily due to delays and backlogs caused by the rapid spread of the virus throughout the country. The new term began on schedule in October, and there are already several important Supreme Court cases that will prove impactful to employers, workplaces, HR managers, and staffing agencies alike.

Read more for information on these cases and the potential impact they might have on the employment landscape in the United States.

Without question, 2020 has been characterized by uncertainty and rapid transformation. This hasn’t just been limited to the business world alone. The changing global situation will likely have an impact on how justices decide specific cases.

It may become difficult to predict how courts will handle disputes, especially those related to employment and workplace protocol affected by  COVID-19. These are unprecedented times and with a justice system based on legal precedents, we may see a significant shift in the Supreme Court’s resolution of future disputes.

One of the most important changes in the Supreme Court is the vacancy left by the late Justice Ruth Bader Ginsburg. The late Justice Ginsburg cemented her legacy through her efforts to create more equitable and inclusive workplaces.

Her lasting rulings have done much to eliminate hiring bias and gender or racial discrimination in American workplaces. We may also see other senior Supreme Court Justices such as Justice Breyer retiring from their seats. The President has the authority to appoint replacements contingent on Senate confirmation.

At the time of this writing, there are very few “blockbuster” cases directly related to employment issues in the 2020-21 term lineup. In the recent past, each term has seen at least one groundbreaking employment dispute. The most recent of these was Bostock v. Clayton County. The Court ruled in favor of the plaintiff, finding removal based on their sexual or gender orientation to violate the Civil Rights Act 1964.

As such, Bostock upheld that employees could not be discriminated against or wrongfully terminated based on their gender or sexual orientation, changing talent acquisition strategies as well as workplace inclusivity significantly. At present, there are very few pending cases in the current term with an outcome that might directly impact employment rules and regulations, however, there are a few interesting cases that could have an indirect impact. These follow in the sections below.

One of the most important cases for the US Supreme Court 2020-21 term is Van Buren v. United States. The outcome of the case could have a massive impact on the limits that employers can impose on employee authority to access work information via computers. The case itself isn’t directly related to employment practices but it will have a significant effect on how courts interpret the Computer Fraud and Abuse Act.

Many employers have used this act to sue employees who accessed unauthorized information or leveraged workplace information for purposes other than work that might directly impact their performance appraisals.

In Van Buren v. United States, the petitioner wasn’t accessing unauthorized information. However, the petitioner had used the information they were authorized to access for an improper objective. The question before the court is whether this is a direct violation of the Computer Fraud and Abuse Act (CFAA).

This is the first time the Supreme Court is reviewing the CFAA. Lower courts have been in disagreement over whether accessing authorized information for purposes other than those directly related to work responsibilities constitutes a violation of federal law.

If the Court rules against the petitioner, it could offer additional remedies for employers to exercise against employees in violation of confidential information use. It will set an important precedent for future civil or federal litigation. The outcome of the ruling will not impact an employer’s existing rights to restrict access to information or disciplining employees for making use of this information beyond the authorized purpose.

The United States Supreme Court frequently sees petitions regarding the validity of arbitration agreements. A major point of contention has been that most agreements include a clause authorizing the arbitrator to determine whether the issue should be placed before a court of law or an arbitrator.

In 2019, the Supreme Court ruled that it was the responsibility of the arbitrator, not the court, to decide whether an existing arbitration agreement applies to a specific dispute if the agreement specifically includes this clause. This was held to be applicable even if a particular claim seems to be beyond the legal bounds of the original contract.

The 2019 case in question, namely Henry Schien Inc. v. Archer and White Sales Inc., is due for a review by the United States Supreme Court in the 2020-21 term. This is primarily to deal with a specifically nuanced question arising during appeals: does an agreement that empowers the arbitrator to make the decisions on arbitrability (even while excluding specific claims), also empower the arbitrator to decide on the arbitrability of an excluded claim?

While this may seem like a nuanced question, the outcome of the US Supreme Court review should offer clarity to employers on how to create solid and clear arbitration agreements and the powers they grant to arbitrators.

Through the Affordable Care Act (ACA), the federal government mandates that all American citizens must maintain a minimum level of health coverage. If not, they must pay a specific penalty to the IRS. The US Supreme Court ruled in favor of the federal government and found the ACA a legitimate use of the tax powers delegated to Congress by the constitution.

In 2017, however, the Supreme Court called for an amendment to the ACA and set the IRS penalty to zero. In effect, this made the enforceability of mandating each individual to maintain healthcare coverage unenforceable. The decision came into effect last year in 2019.

In the 2020-21 term, the US Supreme Court will be hearing two important consolidated cases. In California v. Texas and Texas v. United States, the Supreme Court must address the question of whether the individual minimum coverage mandate becomes unconstitutional by the zero penalties.

And if so, does it make the entire Affordable Care Act unenforceable as a result? Currently, the ACA is viewed favorably by small businesses, employees, and self-employed individuals alike as a way to get affordable healthcare. It is a key point of concern for many incoming employees, whether through direct hiring or third-party services like mortgage recruiters. The case is to be heard by the end of this month.