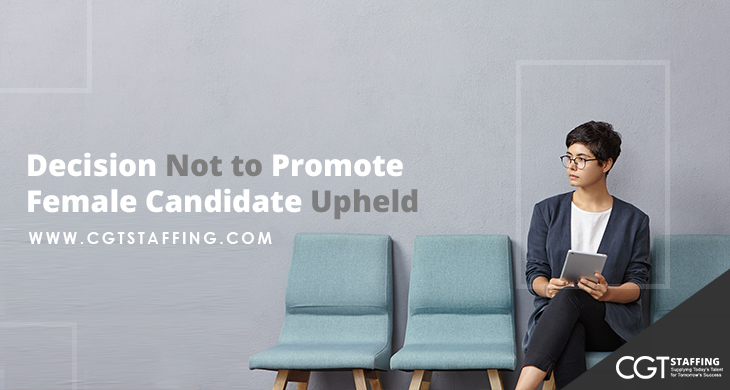 Earlier this month, the Eighth US Circuit Court of Appeals decided to uphold a decision to promote a male employee over a female one after the plaintiff failed to show any evidence of sexual discrimination relating to the promotion process. The case, Pribyl v. County of Wright, Wright County Sherrif’s Office, was filed by the plaintiff who alleged gender-based discrimination when a male colleague was promoted to a position both had interviewed for. The plaintiff had scored the highest on a promotion test out of all the candidates selected. Read on to find out more.

Background on the Case

The plaintiff was an employee of the Wright County Sherriff’s Office, employed there since 1996. She applied for a Court Sergeant position in the Sherrif’s court services division in 2014. The selection process for the role began with a computer-based test that the county used to select candidates who met the minimum requirements to be considered for the court sergeant role. This is similar to testing carried out all over the country to determine competency and aptitude, like in mortgage staffing. With a score of over 86%, she scored higher than all other applicants did.

For reference, the male colleague who ended up getting the role scored the lowest at 52.17%. When after her interview process, the panel did not ultimately consider her for the role, she filed a sexual discrimination lawsuit against Wright County and the Sherrif’s Office under the Minnesota Human Rights Act as well as the Civil Rights Act of 1964. It is important to note that none of the candidates were sourced by a recruitment agency, and were already employed by the Sheriff’s Office.

The candidates who successfully passed the exam were interviewed by a three-person panel. The panel itself consisted of 1 female and 2 male panelists. The interview had no gender-specific questions, was uniform for all candidates, and ran for the same amount of time for everyone. During the plaintiff’s interview, the panelists had unanimous concern for many of her responses. A specific response even gave the impression of the candidate being too casual, odd, or unresponsive to the interviewers.

Ultimately, the plaintiff was not among the five candidates the panel recommended to the sheriff for the court sergeant position. However, thanks to a subjectively better interview, the male colleague who scored the lowest passing score on the test made it to the list. The sheriff further narrowed the list down to three candidates after a review based on their performance appraisals and other factors.

He then discussed the remaining three with his staff and found that the male officer in question was ultimately the best choice. Among other endorsed qualities, the candidate was known to be a strong communicator, good supervisor, team player, independent, and trustworthy. He was a likely choice in anticipating any informational needs the Sherrif’s Office might have.

The Verdict from the Eighth Circuit Court of Appeals

After initially losing the verdict, the plaintiff appealed to the US Eighth Circuit Court of Appeals. However, earlier this month the court upheld the verdict and dismissed the appeal. In doing so, the court admitted that while she was the most objectively qualified individual in the pool of candidates, there was other subjective information to consider as well. The test on its own did not guarantee the position; it was merely a guarantee for an interview.

Moreover, the county had the right to compare the interview performance of the five candidates that were ultimately recommended to the sheriff. This case is a good example of why organizations need clear and transparent talent acquisition strategies that are free from sexual discrimination or bias. When cases like this arise, the strength of your hiring process will support you.