What US Workers Think Of Large-Scale Automation In the Workplace 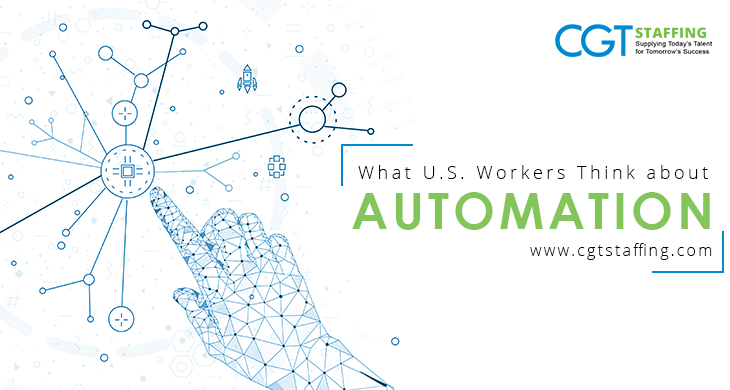 Automation has been part of the business world for some time. One of the first areas in which automation first became apparent was in manufacturing. Manufacturers moved from labor-intensive production processes to machine-intensive ones and it worked! Improved quality, consistency, and efficiency, all propelled industrial development as we know it today. Many would argue that the rise of automation meant the death of labor demand. But is that how the public feels? Any full-service staffing agency would do well to understand the sentiments among the people they deal with. That is why this blog explores public opinion on automation among workforces in the United States, as first appearing in this extensive Pew Research Center article.

What Workers Think Of Automation in US Workplaces

Of course, with automated machinery not as many people are needed on the manufacturing or assembly line anymore. At the same time, new and better-paying jobs emerged as technology and automation improved. It even resulted in new types of talent acquisition strategies. Irrespective of advancements, many aspects of automation still rely on human guidance, especially the more subtle kinds of automation, such as the AI-assisted systems that you see in many business operations.

Automation has inherited the “machine vs. man” debate, but a look at what workers in America think about it offers a new perspective. Here are a few questions that cover most of the key apprehensions people have about automation in the workplace:

Let’s take a closer look at these questions and the answers that accompany them.

Do Workers Think Most Jobs Will Be Automated by 2050?

Let’s start with the basics first. In this case, the question is concerned with how seriously the workforces of today take the shift towards automation. A survey showed that approximately 8 out of every 10 adults in the US believe automation will handle (or will probably handle) most of the work that humans currently do. Around 37% of adult workers also believe that automation will almost inevitably take over the roles they currently occupy.

How Do Workers Feel About an Automated Future?

Seventy-six percent of American workers have a very dim view of the automated future by 2050. That means over three-quarters of the American workforce believes that automation would increase the income and wealth inequality between the rich and the poor. This would result from automated systems and robotic workers completely taking over human roles. However, a smaller percentage (around 33%) of adult workers do believe that large-scale automation will create new and higher-quality roles for human workers.

What Do Workers Think of Existing Workplace Automation?

Almost half (48%) of adult workers surveyed indicated that the advancement in automation and sophisticated technology has been detrimental to the US workforce. Many believe large-scale automation in current times has hurt workers instead of helping them. A small minority (22%) are of the opinion, however, that automation has generally helped businesses and their workforces, such as with more accurate performance appraisals. The research indicated that older adult workers (aged 50 or above) are more likely to say automation harmed American workers and took over job roles. The same applies to people who at the time of the survey had no academic qualification beyond a high school diploma.

Do Workers Believe Automation Will Disrupt All Professions?

The vast majority of adult US workers believe automation will disrupt specific roles. These typically include fast-food employees (77%) as well as insurance claims processors (65%). Fifty per cent of the people surveyed indicated that automation could take over roles ranging from clerks to software developers to mortgage recruiters. Around 30% believe that automation will ultimately disrupt the roles they currently occupy themselves.

Which Worker Demographics Feels Most Affected by Automation?

From the survey, it seems apparent that younger workers (aged 18-24) are among the segments most affected by automation. Thirteen per cent of this segment of workers have either lost a role or saw a reduction in pay and/or hours once their employer introduced automation. Eleven per cent of the part-time workers surveyed had the same general complaints.

What Protection Do Workers Feel Would Be Adequate In the Face of Automation?

A significant number of American workers believe that governments should impose limits on businesses in terms of replacing human roles with machines. Even if the machines are cheaper and offer better long-term utility, 6 in every 10 American employees feel employers should be restricted when replacing human jobs with automated systems or robotics.

An overwhelming 85% of people surveyed are in favour of a federal policy to guarantee their protection and continued security in the face of large-scale automation. Many were open to the idea of the federal government offering a guaranteed basic income to qualifying workers as well, specifically in cases where they have lost a job to automation in the workplace.