Latest News on Minimum Wage Increases: What to Expect in 2022? 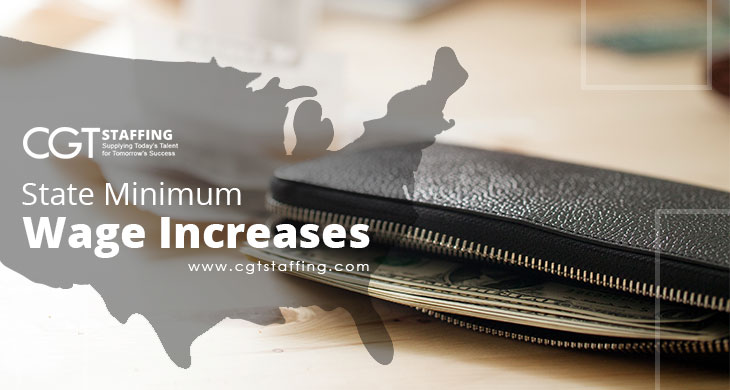 The minimum wage in the United States is significantly higher than in many other parts of the world. However, the economic turmoil over the last few years has prompted the government to announce a minimum wage increase in 2022. While the official increase was announced in April via an executive order issued by President Biden, many states are still in the process of implementing it several months after the initial announcement. For employers in various states, this could be a significant change that they need to pay attention to. Here’s everything you need to know about the rise and how it impacts businesses in major states.

It bears noting that these contractors employ hundreds of thousands of American employees to work on federal contracts. As a result, a significant portion of the American total workforce would see a significant increase in their hourly salary.

According to the White House press release issued the same day, the Biden-Harris administration acknowledged the contribution of each class of workers to the functioning of the government. From cleaning staff to maintenance personnel to construction, food, and nursing employees, contractors and their employees are critical to keeping the government up and running.

As a result, the minimum wage increase aims to help cushion these essential workers against the steep rise in inflation.

The Executive Order Builds on the Last Minimum Wage Increase

What Was the Last Federal Minimum Wage Increase?

The last wage rise coming by way of an executive order was in February of 2014. It was issued under the Obama-Biden administration when Biden was then Vice President. This particular executive order raised the minimum rate to $10.10 per hour, as well as a subminimum increase for tipped workers such as waiters, valets, and similar employees to $7.65 per hour.

Why Is the Government Increasing Minimum Wages in 2022?

As with the Obama-Biden executive order, the Biden-Harris executive order seeks to deliver a minimum wage increase for key strategic reasons. The primary reason is to promote economic activity, whereby workers with a higher wage can put the additional income into economic circulation.

At the same time, the government recognizes that a higher wage motivates workers to perform more efficiently. Thus, it carries a probability of ensuring a more efficient output derived from every taxpayer dollar directed towards a federal contract. There are several other factors as well, including an improvement in healthcare access, lowered turnover, and a decrease in recruitment costs for federal contractors.

How Effective Can the Federal Government Salary Increase, 2022 Be?

The study concluded that every one dollar increase in hourly wage delivers a return of approximately $1.50 in terms of increased productivity and efficiency.

That includes lowered absenteeism and turnover costs as well. The increased wage rate could deliver a higher output to counter the increased cost of federal government contracts. For now, the Executive Order issues:

The Impact of Minimum Wage Increase: Pros and Cons

The increased wage rate is a welcome relief to many employees working for federal government contractors. However, many employers are understandably concerned over the sharp rise. Understanding the reasons for and opposition to the increase may help to understand these opposing perspectives.

The Advantages of a Higher Minimum Wage

The most obvious advantages of a higher wage rate for federal contractors and their employees are as follows:

There are, of course, certain economic disadvantages to raising the minimum hourly wage rate. These key areas make a compelling case against such a sharp uniform rise in wages and salaries:

The Impact of Hourly Wage Increase on Small Businesses

The effects of a minimum wage increase can impact smaller firms and businesses in a more acute way than larger firms, particularly in states that already have a very low cost of living compared to those with a higher cost of living. In California, for example, the average home can cost upwards of $635,000. A comparable home in, say, a less costly state like Oklahoma costs a fraction of that amount, roughly $143,000. The different state economies can make it impractical and unsustainable for businesses to apply a uniform federal minimum hourly wage.

How Will States Implement the Federal Government Salary Increase 2022?

While the minimum wage executive order was issued in April of 2021, there are challenges to implementing it uniformly across all fifty states and Washington DC. In 2022, many are still encountering roadblocks and resistance to implementing the new rate.

Unlike smaller countries, each separate state in the United States has varying degrees of autonomy. Each state has its own Department of Labor, as well as different regulatory bodies and rules governing minimum wage employment. Additionally, each state also has a distinct economy. This means they may have different income levels, costs of living, housing costs, fuel prices, power costs, and so forth. This complexity is undoubtedly playing its part in slowing the implementation of the federal wage increase directive.

The Major States With Minimum Wage Increases in 2022

The minimum wage federal 2022 increase was to be in effect immediately after January of this year. However, owing to the complexity involved, the situation is still far from uniform. For employers that operate in different states, the actual and/or expected changes in several major states follow below:

In the State of New York, the minimum wage increase is being applied incrementally. According to the New York State Minimum Wage Act, the state Department of Labor is empowered to increase wages annually. Therefore, the increment is applied on the 31st of December each year. The state will continue to gradually increase the wage rate until it is on par with the federal directive of $15.00 per hour.

The constitution of the State of Nevada requires an evaluation of the minimum wage rate each year, following the Consumer Price Index. If needed, the wage can then be changed as seen fit by the state government. As of April 1st, 2022, the Department of Business and Industry has bumped up the minimum wage rate. This new law will be effective starting July 2022. Further, it plans to increase it over the years till it reaches $11.00 per hour for employers that offer qualifying benefits and $12.00 per hour for employers that don’t offer qualifying benefits by 2024.

The District of Columbia Department of Employment Services has announced an increase in the minimum wage to $16.10 per hour from $15.20 per hour for all minimum wage workers. This precludes any qualification for employers, including size. It also seeks to elevate the wage rate for tipped employees to $5.35 from the current $5.05 per hour. However, where the average weekly tipped income (combined with base wage) falls short of the District’s full minimum wage, the employer must meet the difference.

The California Department of Industrial Relations has made the new increased federal wage rate mandatory for all employees in the state. There are a few exceptions, but the increase in the wage rate will be phased in retrospectively, effective from January 1st, 2017 across all industries. For employers with lower than 25 workers, the wage increase will be phased in after a 1-year delay. The state aims to meet federal wage guidelines by 2024.

The State of Florida links its wage rate and subsequent increases to the consumer price index. For now, the state mandates a minimum hourly rate of $10.00. However, per existing labor laws and the Fair Labor Standards Act, the state plans on increasing the minimum wage each year, with the next increment scheduled for September 2022.

Moreover, the state makes it mandatory for employers to visibly display the approved hourly rate, thereby ensuring all workers are aware of it. This helps to ensure that Florida’s large immigrant worker population is protected against exploitation and unfair compensatory practices.

The Code of Virginia, Labor and Employment section mandates all employers pay their workers at least the federal minimum wage before May 1st, 2021. In addition, the state plan.

The Industrial Commission of Arizona has made a raise in the minimum hourly wage mandatory from January 1st, 2022. The state officially increased the minimum rate from $12.15 to $12.80 per hour. It credits the 65% increase to be in line with a rise in labor rates from August 2020 to August 2021, in line with the published figures from the federal Consumer Price Index issued by the US Bureau of Labor Statistics.

The Illinois Department of Labor plans to gradually raise its minimum wage rates to $15.00 by January 2025. This includes a parallel increase in subminimum wages for tipped workers as well. In addition, the state also allows tipped workers to receive at least 60% of the hourly minimum wage.

For young workers that clock less than 650 hours a year and are under the age of 18, the state allows for a reduction in hourly wage paid of not more than 50 cents. These rules apply uniformly across the state and will govern the Chicago minimum wage increase, along with other major urban centers.

At present, Idaho is sticking with the $7.25 minimum wage rate. However, the state had plans to increase the same to $12 per hour, targeting June 2024 to reach this milestone. Unfortunately, with the global health crisis in full swing by 2020, the state was unable to bring the Idaho Minimum Wage Increase Initiative as a state statute on the November 2020 ballot. The state is currently holding the same $7.25 minimum hourly wage in 2022, unchanged since 2020.

The State of Delaware most recently increased its minimum hourly wage rate from $9.25 to $10.50 from January 1st, 2022. Under legislation signed by Governor John Carney in July 2021, it also plans to increase its minimum wage by $1 each year. By 2025, the state aims to meet the federal minimum of $15 per hour.

The State of Colorado has already implemented an increase in wages at the start of 2022. State employees will receive at least $15 an hour, to fill key vacancies as well as retain staff. Governor Jared Polis has already signed the increase into law with the 2021-2022 state budget.

The Governor has already approved an increase in the state budget for minimum wages for state workers. In addition, Denver has raised the minimum wage citywide to $15.87. The new rate is effective from Jan 1st, 2022. The city plans further increases from 2023 based on the Consumer Price Index.

1. When was the last minimum wage increase?

The last federal minimum wage increase was in February 2014 under the Obama-Biden administration.

2. What happens to other wages when the minimum wage increases?

3. When minimum wage increases, does everyone get a raise?

No. Most increases target only those workers working at the minimum rate.

4. How many jobs will be lost if minimum wage increases?

This is not definitively known, but the Congressional Budget Office warns of a loss of 1.4 million jobs.

5. Does raising the minimum wage increase cost of living?

The Upjohn Institute for Employment Research indicates that this may not be the case, and the pass-through effect is much smaller than previously believed.

8. When does the minimum wage increase?

When a federal or state legislative body passes a law to do so.

9. Why is it good to increase the minimum wage?

It automatically raises the standard of living for minimum wage employees, empowering them to better manage higher costs of living.

10. When will Texas minimum wage increase?

It is unclear at this time whether this will happen. The minimum wage for most of the state has remained unchanged since 2019. However, Houston Mayor Sylvester Turner has announced plans to increase the minimum wage within that city.