4 Signs That Could Indicate a Need for Cohesive Team Building 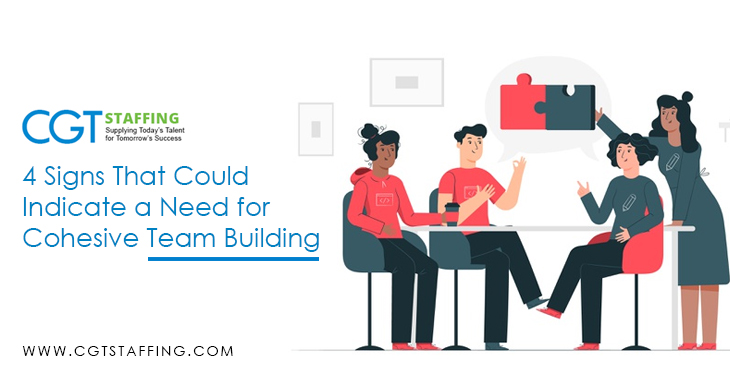 Building an effective team does not happen overnight. It takes painstaking effort to collect individuals that can work towards a shared and common goal. It takes even more effort for a leader to dynamically engage with his or her team, and lead them to success from the front. These efforts often require working closely with a staffing agency to source the talent you need.

However, despite your best efforts, your team may become dysfunctional, mostly due to certain factors that can’t be seen as clearly as others. This blog explores four signs that could indicate you need cohesive team-building efforts to bring your team up to desired performance and workplace standards.

A Disconnect In Communication

One of the earliest signs of dysfunction within your team is a breakdown of communication between two or more members. When team members aren’t communicating with each other, there is a greater risk of misunderstandings, mistakes, and inefficiencies. This breakdown in communications can be due to any number of reasons such as conflict, bullying, misconduct, or even low team morale.

The first step in remedying this situation is understanding the challenges that are causing communication breakdowns. At the same time, you need to put in the effort to understand the specific individuals in your team. For example, a new hire from a manufacturing temp agency might be having issues fitting in. Once you have an understanding of the problem and the players, you are in a better position to address the underlying issue. After it is resolved, team-building exercises can help restore cohesion.

Teams are built on a foundation of trust and mutual understanding. When it is apparent that your team members don’t trust one another, it is obvious you have a cohesion problem. When team member A mistrusts team member B, A will be more likely to assume any actions on B’s part carry ill intent and vice versa.

When this trust deficit exists, it is much harder for team members to ask each other for help or to rely on another team member’s expertise. In most industries, this spells disaster for team productivity. Especially in financial services, where the margin for error is very low. For example, you may even be forced to look at a mortgage staffing agency to replace more contentious team members if things don’t improve.

However, there are other avenues to explore as well. While leading by example demands that you communicate your trust to the team, you can also work on creating a more transparent environment. At the same time, you should reward honesty and integrity within the team, to add credence to an employee’s bonafide actions. Use the people analytics your business generates to identify which employees are better team players and reward them to encourage others to follow their example.

While healthy competition is good for teams and the business as a whole, outright conflict isn’t. Conflict within teams disrupts the synergy and comfort they have built up with each other. Any conflict that isn’t resolved at the earliest tends to fester and lower employee morale. In certain cases, it can spill over and create a hostile working environment.

Ultimately, it will impact the entire team’s ability to perform. This is where leaders need to emphasize that while team output is a big part of a performance appraisal, so is workplace decorum and maintaining a healthy environment. Conflict needs to be addressed as early as possible and resolved without any prejudice, such as hiring bias.

An Increase in Employee Turnover

A sudden increase in employee turnover could indicate that your team is losing cohesion. This could be a result of all of the three reasons discussed above. Employee turnover is bad for your employer brand, workflow efficiency, and business continuity.

It also costs businesses significantly in terms of finding and training a replacement. When multiple employees leave simultaneously, the problem is compounded. Ultimately, it is down to you to use your capacity as a leader to ensure the workplace remains a welcoming and inclusive space that encourages healthy dissent, innovation, and rewards performance.