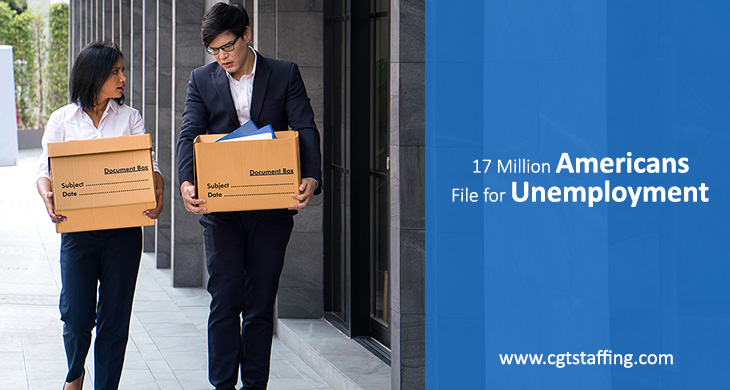 Even so, most experts agree this number is low relative to the actual unemployment rate, factoring in those who have not applied or otherwise been unsuccessful in applying for unemployment benefits. This is a sign of more pain to come as the economy reels from the coronavirus epidemic.

An Update on the Pandemic Situation in the US

As of the time of this writing, over 500,000 people in the US have tested positive for the virus. In response, the government has enacted measures to contain the spread. Some of these have boosted business volume, as mortgage staffing has increased following the reduction of interest rates to record lows.

Conversely, many safety measures have shut down sectors of the economy, with residents in 42 states told to stay at home. With economic pain felt in most sectors, many businesses have been obligated to furlough or terminate their employees.

The Damage to the US Economy

The staggering number of job losses is unlike anything seen in recent decades. At the peak of the Great Recession, from 2007 to 2009, over 15 million Americans lost their jobs. Should the current trend continue unabated, economists warn that the economic damage from the pandemic will quickly exceed that total.

In February 2020, prior to the onset of COVID-19 in the United States, the official unemployment rate sat at 3.5%. In the span of a few short weeks, it sits at nearly 10% in April. During just a few weeks, the unprecedented economic progress over the last decade has been largely, temporarily, negated.

A Look at the Unemployment Claims Filed So Far

For the week ending March 28, the number of unemployment claims filed represented the largest number ever recorded in a single week since the government began keeping track of statistics in the 1960s.

The second-highest number of claims was the 3.3 million filed the week prior. The third highest was around 700,000 claims, filed in one week of 1982. Staffing agencies are reporting more and more people signing up, with new job vacancies at a premium.

The staggering number of unemployment claims has unsettled economists worldwide. The largest number of claims filed in the United States originated in California – a total of 878,727. In the preceding week, the department saw an influx of 186,333 claims. This number represents twenty times the volume of pre-pandemic times.

What the Government Is Doing

Quarantined or infected workers are to be allowed two weeks paid leave under the law. Additionally, employees caring for homebound children unable to attend school or daycare are to be permitted an additional 10 weeks of protected leave. Unfortunately, the success of these measures in stemming the tide has yet to be seen.

It bears mention that the number of unemployment claims does not completely represent the number of out-of-work Americans. Self-employed workers are usually not eligible for state unemployment benefits. The current number also does not include people who left their jobs voluntarily, whether as a result of disagreement over job description and responsibility, to care for a family member, due to sickness, or any other non-pandemic reasoning.

According to the Congressional Budget Office, the unemployment rate can be expected to stay as high as 9% until 2021. This means that the effects of mass furloughs, unemployment, and the closure of businesses will continue to sting for some time to come.